It does seem like a bit of a cop-out to recommend a doll as a STEM toy for girls but the truth is most girls do love to play with dolls and if we can replace Barbies and Bratz dolls with a more positive role model for our daughters, why wouldn’t we choose that option?

At first glance these STEM dolls look like any other fashion doll with long hair, stylish outfits and made-up faces, but looks can be deceiving! There is more to these dolls than meets the eye.

The dolls are based on characters from the Netflix series of the same name, which features girls who are smart as well as fashion forward, trying to change the perception that girls who are interested in math and science are geeks and nerds

McKeyla McAlister is a writer, hipster, and undercover spy who likes journaling, upcycling and trying to save the world.

Bryden Bandweth is the tech savvy girl of the bunch. She’s into tweeting, digital photography, podcasts, and can’t live without a ‘net connection.

Camryn Coyle is known for her high IQ and is an amateur mechanic who hangs out in the garage making modifications to her skateboard.

The plot lines of the series revolve around the girls completing a series of spy missions with the aid of science and technology.

The dolls don’t just look like their real-life counterparts but each one also comes with a science experiment that your kids can carry out such as a volcano made from vinegar and baking soda or a DIY glow stick necklace.

The aim of the series and of the dolls is to encourage girls to follow their own natural interests and eventually go into STEM careers and show them that being smart is also cool.

MC2 dolls are also designed to look different from each other and the tall skinny blonde stereotype. They have different heights, different face shapes and ethnicities. 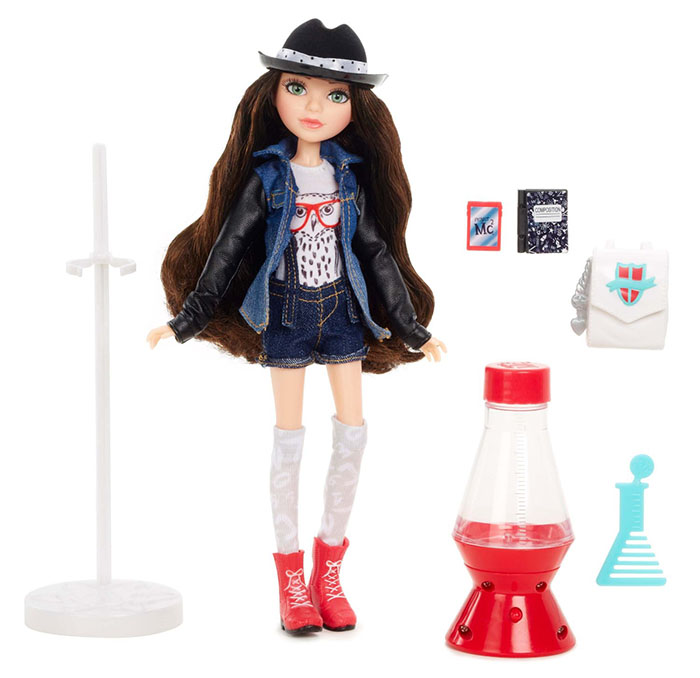 The McKeyla doll comes with a 5-inch lava lamp with LED light that can be created from household ingredients (water, food coloring, vegetable oil, effervescent tablet such as alka seltzer). The experiment instructions also explan the science behind the experiment and why oil and water don’t mix.

The doll is 11 inches tall and has long brown hair, green eyes and freckles. Girls tend to prefer dolls that look like themselves so you can choose the character who most looks like your child.

Other fun accessories inside the box include: 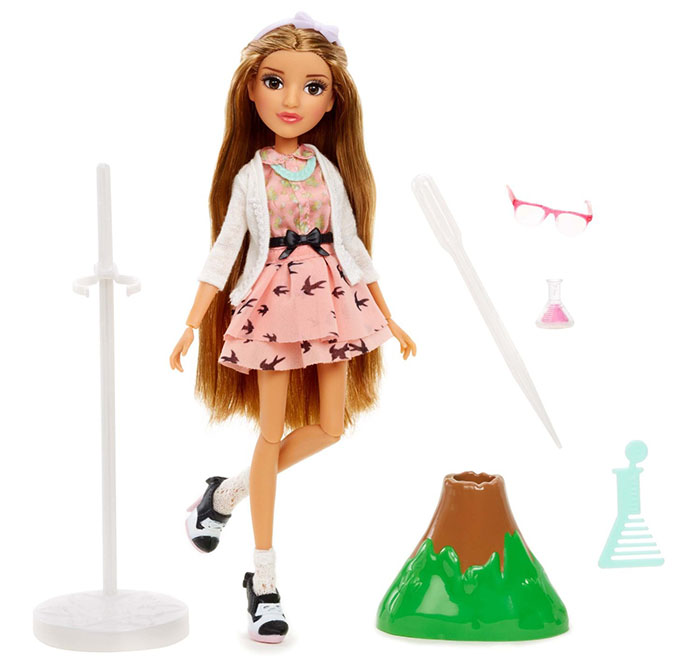 Adrienne’s experiment is a volcanic eruption using baking soda, food coloring and vinegar and the doll comes with a plastic volcano and eyedropper for carrying out the experiment. The instructions explain the science behind the eruption and why mixing an acid with a base produces a gas.

Accessories in the box include: 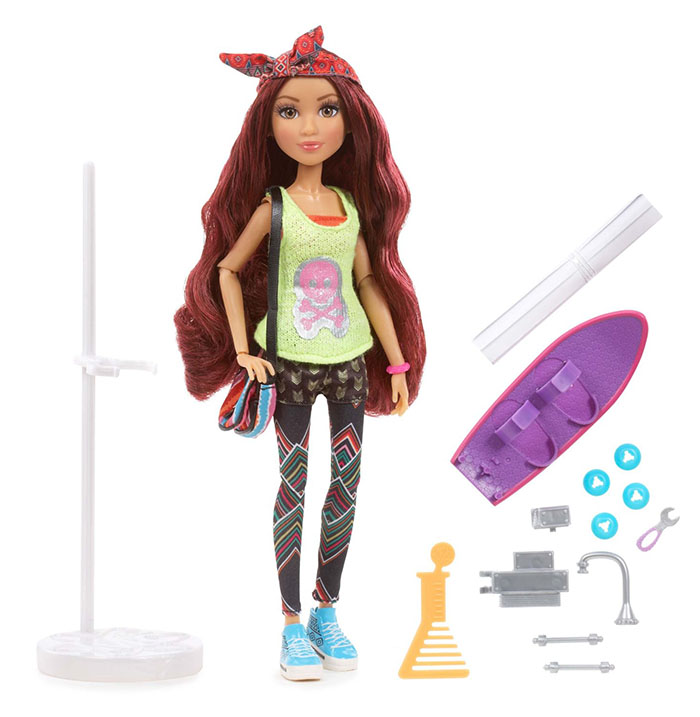 Camryn is a sassy doll who comes with a special blueprint skateboard. The experiment included with this doll involves using special paper that reacts with water to reveal plans for constructing the skateboard. 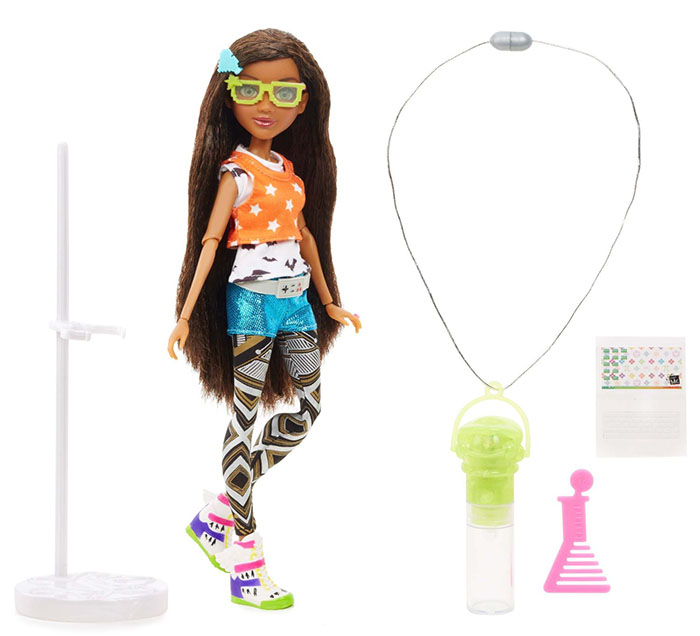 Bryden comes with an experiment to make a glow stick necklace from tonic water and food colouring. The experiment instructions explain that the quinine in the tonic water contains phosphors that create the glow.

The Bryden character is black or mixed race and this doll has a darker skin color than the other three dolls. She has long textured dark brown hair, green eyes, and comes wearing funky winged boots, print leggings, shiny blue shorts, a Nintendo controller belt and bat and star print layered t-shirts, as well as a funky hair clip

All the dolls are also available as a “core” doll that comes wearing a different outfit and without the science experiment. 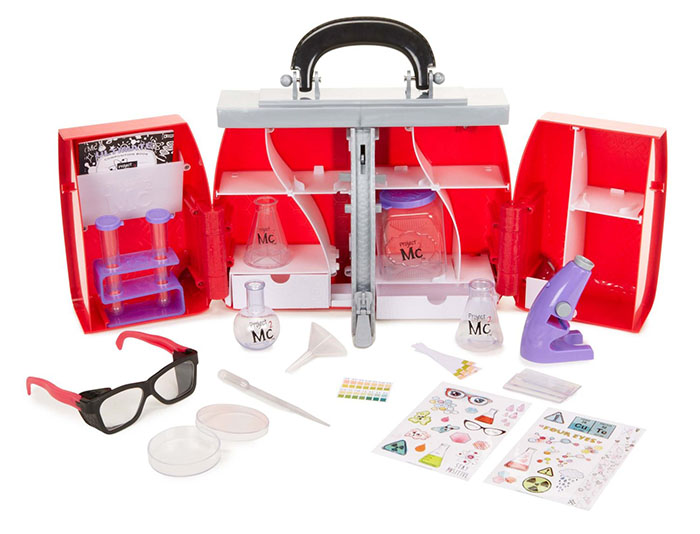 There are also a range of science toys based on the Project Mc2 series that do not come with dolls. The Ulimate Lab Kit is the largest of these and includes an oversized lab kit and instructions for experiments that kids can do at home.

The whole kit comes inside a plastic ‘lab bag’ that can be snapped shut so that everything is put away neatly.

Girls who’ve seen the series will love this kit but even those who know nothing about the characters will have loads of fun conducting the experiments. What is great about this kit compared to other science sets is that it usues household ingredients so there’s no need to buy refill packets of chemicals that come in many chemistry kits. 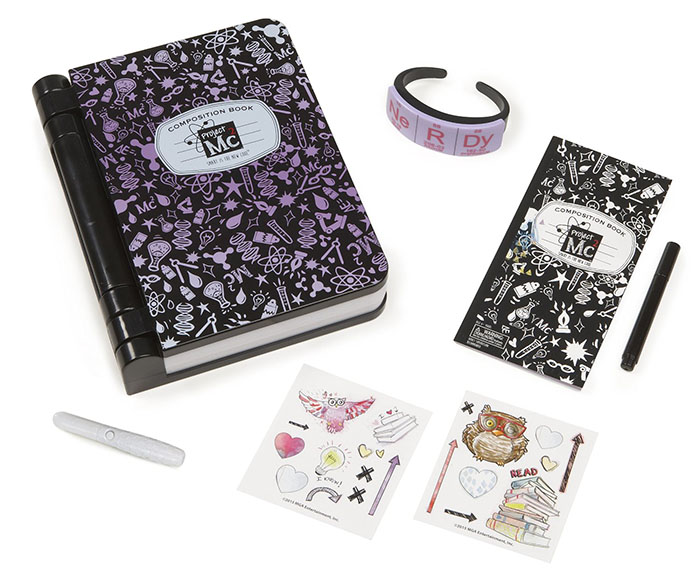 This Advanced Digital Intelligence Spy Notebook looks just like the one McKeyla McAlister uses on the show and comes with a special “NeRDy” bracelet that unlocks the journal, two recorded messages from NOV8, stickers, invisible ink pen, UV black light and booklet with fun activities.

Tween girls love keeping diaries and things with secret compartments and anything to do with spies and secret messages is an added bonus – I remember having so much fun writing messages in invisible ink when I was a kid!

There are so many kids using smart phones and tablets these days so the app is a nice touch. It would be nice if they could make a version for Android phones however. 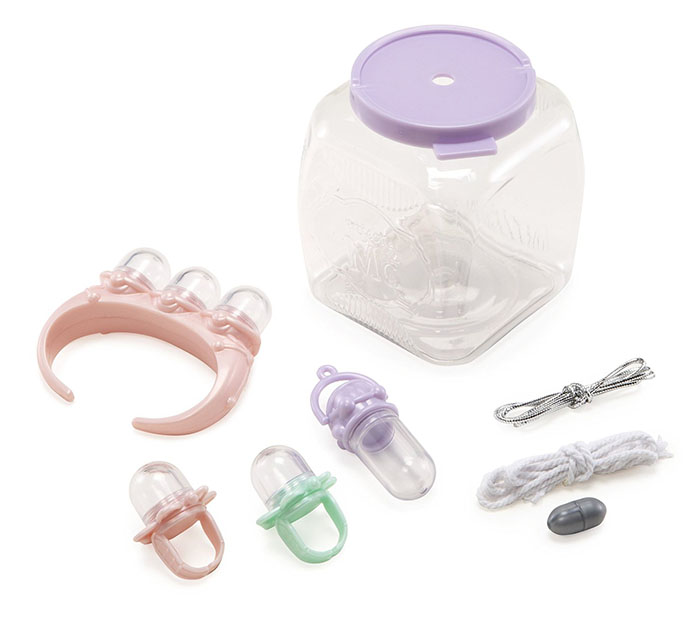 This is a basic chemistry kit based on the Project Mc2 series and the character Adrienne Atoms who uses her science knowledge to make her own culinary creations.

As this experiment involves boiling sugar and water, which can get extremely hot, it’s definitely not suitable for younger kids and requires a fair bit of adult supervision. However it’s a fun activity to do together with your child. 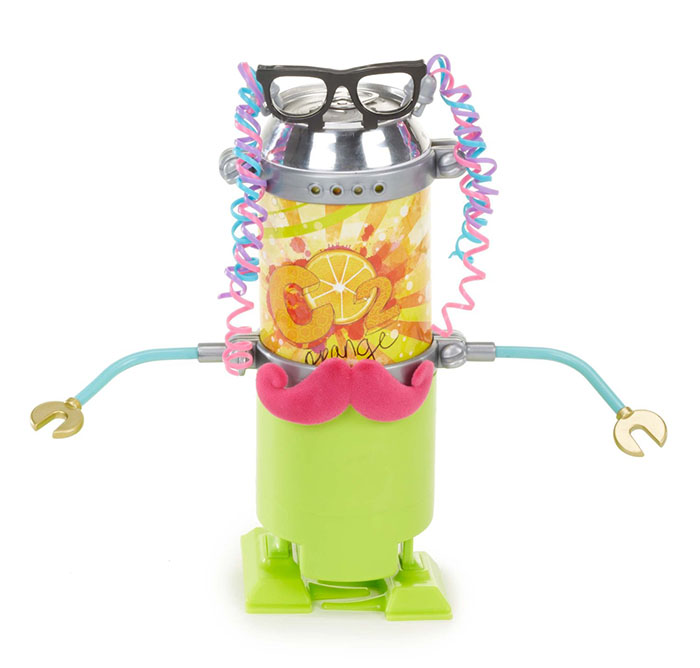 This kit includes everything you need to make a robot out of a soda can, just like Project Mc2 Camryn Coyle. It’s more of a crafty construction project than a science experiment and is sure to be lots of fun for arty and creative kids.

Making this robot would be a nice creative activity for an afternoon and then your kids can play and watch the battery operated robot walk around later.